History of the organization: Sancharika Samuha, Nepal (SASN), a forum of women journalists and communicators, was established in April 1996 with an inspiration from Beijing Platform for Action to take forward the Section 'J - Women and Media' of the BPFA in Nepal. SASN was registered with the Lalitpur District Administration Office in April 1996 and affiliated with the Social Welfare Council (SWC). It has also acquired Permanent Account Number (PAN). Currently, approximately 1,200 women journalists from across the country are affiliated to SASN. It has its Provincial networks in seven provinces of country. It is further extending its offices at the district level as well.

The Vision of SASN is 'A Nepal with an equitable society where women, men, girls and boys alike can enjoy equal rights' and its Mission is to create gender equal society by enhancing the capacity of media for promoting equity and equality based development. Its objectives include mainstreaming gender issues in media, enhancing representation of female journalists in media and strengthening their capacity and ensuring press freedom.

As a media organization Sancharika Samuha Nepal has been relentlessly working for the welfare and empowerment of the community in favor of social campaign. SASN prioritized its advocacy program: to create social awareness, bring positive changes in the thoughts and behaviors of people towards respective subjects, establish campaign in favor of community and society, and cement the voice that is in favor of welfare of the community. The targeted groups of these advocacies are government, policy makers, social activist, political analyzers, editors and publishers, member of citizen networks, etc.

Relationships:SASN has developed good professional relationship with various national, regional and/international organizations, coalitions, alliances and social movements over the past two decades. SASN, depending on the gravity and the nature of issues, builds alliance with different organizations and change actors and has been able to render itself as a distinct authority in the field of gender and media and women's rights. Nepali policy makers and international NGOs often seek consultation, advice and support from SASN on issues concerning media and gender. SASN accepts support only when the donors' values and principles align with its values and principles.

Institutional Governance: A General Assembly (GA) is held annually to inform all the general members of SASN about the activities of the organisation and take strategic policy decisions. The assembly, every three years, also elects a 17-member Executive Committee (EC) of SASN for a three-year term. The present EC was elected by the GA on16 September 2018. The EC is the policy-making body of the organization. In order to advise the EC on its policy and programmes, an Advisory Board has also been established among noted journalists and civil society experts with gender balance. SASN, based on the expanding scope and volume of its work, has also expanded its management team. The team comprises of professionals in programme management, finance and administration, SGBV media monitoring, communication and logistics units. The organization's day to day functions are guided by its operational manual which includes policies on financial management, personnel management, administration and GESI.

Institutional expertise: SASN is a pioneer women journalists' organization formed to mainstream women’s issues in media and to enhance the representation of women in media. The key activities of SASN include gender training for media professionals; publication of monthly ‘Sancharika Features’ since 1997 on violence against women and girls and women’s rights; basic journalism/feature writing training, investigative reporting and ethical media reporting training for men and women journalists since 2005; media monitoring since 1998 to ascertain the trend and pattern of media coverage on women’s issues and VAW&G for advocacy; production of weekly radio and TV programmesSamakon on women’s issues; publication of an online news portal (www.mahilakhabar.com) covering women’s issues; establishment of Sancharika Equality Award, 2000, Sancharika Encouragement Award, 2008 and Late Uma Singh Journalism Award, 2009 to encourage women journalists and women’s issues and continued lobby, advocacy on women’s issues through public hearings, conferences, social media messages webinarss and public day celebrations. SASN also started Sancharika Bahas on positive masculinity to increase reflection on the roles and responsibilities of men in changing traditional gender norms. The purpose of the campaign is to demonstrate how men can and have taken the responsibility to change their own perception and behaviours, despite growing up and living in a patriarchal set up. 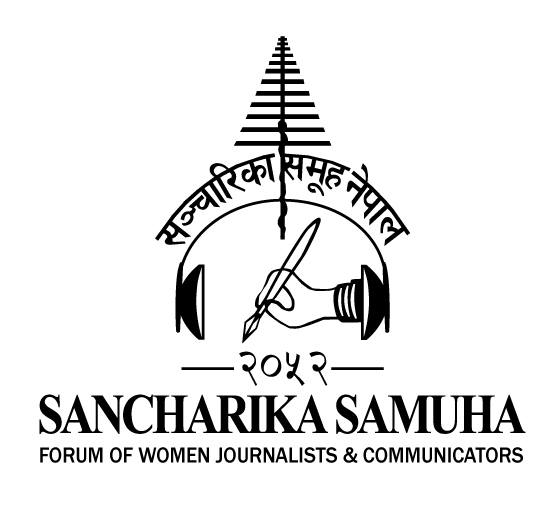 A Nepal with an equitable society where women, men, girls and boys alike can enjoy equal rights.

To create gender equal society by enhancing the capacity of media for promoting equity and equality based development.